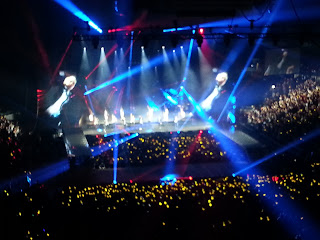 One of South Korea's most successful K-pop group, Big Bang, touched down in Toronto, Canada, and they did not disappoint their fans.

On October 13, 2015, Big Bang hit the stage at the Air Canada Centre (ACC) in Toronto, bringing their highly anticipated MADE TOUR to Canada. After touring through Los Angeles, Mexico, and New Jersey, they wrapped up their World North American Tour in Toronto for a final show.
Thousands of fans gathered around the ACC hours before the show, either hoping to see their idols or be the first to get their hands on the concert merchandise. By the time the doors had opened, there were only a few signature light sticks left for purchase.
Blasting fireworks, the group kicked off the party in Toronto by performing their upbeat, summer banger, 'Bang Bang Bang' which immediately got the crowd on their feet. From that point on, no one sat back down. 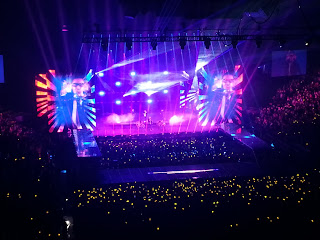 Having debuted in 2006, Big Bang, which consist of GDragon, Taeyang, T.O.P, Daesung, and Seungri, began their summer by releasing 2 tracks of their MADE album at the beginning of each month, a promotional tactic that for sure left fans wanting more. Not only did it build anticipation, the tracks also ranked near the top of Billboard's Top World Digital Songs list.
This is also the first time an artist or group from YG Entertainment, one of South Korea's biggest entertainment companies, has performed in Canada. And many believe this may be a once in a lifetime concert.
"I honestly don't think they'll be coming back to Toronto," one fan said after the concert. "Maybe they'll come back for their farewell concert," another one answered.
When a group like Big Bang comes to Toronto, especially when fans think it's a once in a lifetime experience, crowds don't let them end the concert when they want to. Coming out to perform Bang Bang Bang and Loser for the encore, Big Bang bowed to the crowd one last time as the stage closed and the credits the show rolled to mark the end of their MADE World North American tour.
Posted by Unknown at 20:34 No comments: 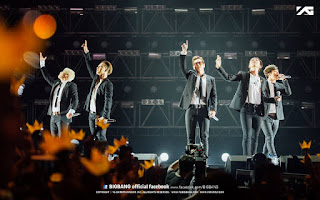 South Korea's KPop group, Big Bang, is expected to arrive in Toronto for their show at the Air Canada Centre a little more than 24 hours from now.


Flying in from New Jersey, they will be concluding their MADE World Tour on October 13, 2015 in Toronto, and the gentlemen of Big Bang will hope to end with the biggest bang yet. Their first time in Canada, South Korea's hottest group hopes to leave an impression in Toronto.


The show begins at 8pm on tomorrow, October 13, 2015, at the Air Canada Centre. Fans are expected to gather early at the doors, with the Big Bang hype in Toronto. This could be a once in a lifetime event for Canadians. Let the Big Bang hype begin!
I'll have full story after the show tomorrow!